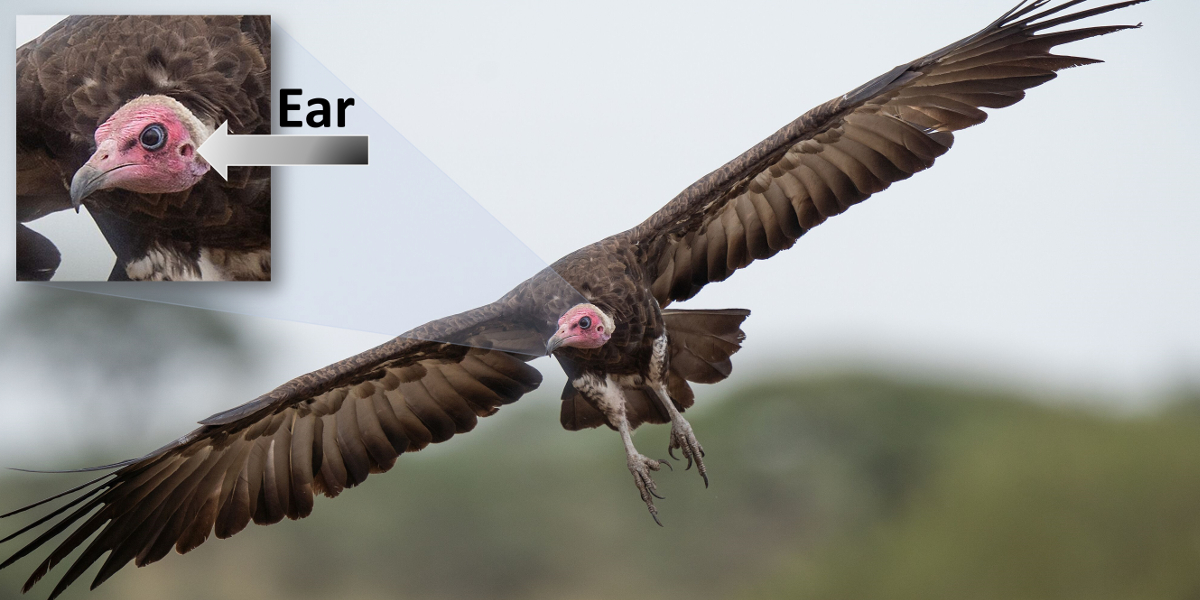 New research shows that the vulture uses hearing, and not just vision, when looking for food. This is a hooded vulture. Photo: Per Harald Olsen, NTNU

Vultures and other avian scavengers characteristically circle the skies, scanning the ground for carcasses. New research has revealed that these birds can, in addition to sight, respond to auditory cues indicative of potential foraging opportunities.

To date, Africa’s vultures have been thought to rely exclusively on eyesight whilst foraging. This may be either through the direct observation of animal carcasses, or by observing mammalian carnivores or avian scavengers approaching a carcass. Using recordings of lions and hyenas squabbling over a kill, and researchers have now established that these birds are capable of detecting and responding to sound, too.

The capture and killing of large herbivore prey, as well as the subsequent competitive interactions between competing carnivores is often noisy, being audible for prolonged periods and over large distances.

The sound of food?

As part of the EU-funded AfricanBioServices project, the researchers’ primary objective was in fact to survey large carnivore populations. Repeating an earlier survey conducted by Dr. Tom Maddox and Dr. Sarah Durant, the research collaboration sought to assess changes in large carnivores populations across the greater Serengeti Ecosystem, Tanzania. Recordings of a distressed wildebeest calf as well as lions and hyenas squabbling over kill were broadcast over powerful loudspeakers, for 60 minutes in total, at numerous locations across the ecosystem. Unexpectedly, numerous birds were recorded at 122 of the 318 the early morning playback sessions.

«Although no carcasses or bait were used, avian responses may have been facilitated by the presence mammalian carnivores at the call-in stations. We could however rule this out, as birds arrived first – before any other animals – in 22% of occasions. In these instances, sound was the only possible cue upon which they could have based their response», says Craig Jackson, researcher at the Norwegian Institute for Nature Research (NINA). The findings from the study were recently published in the journal Ecology and Evolution.

A total of 482 birds were recorded at the 122 survey locations. This included 320 vultures, 109 eagles, 21 storks, 16 kites and 16 crows. In 87,6 % of occasions, birds were landed or perched in close proximity to the loudspeakers. Five of the six vulture species known to inhabit the ecosystem were recorded at the call-in station sessions.

«Many birds have a fairly well-developed sense of hearing. Since vultures have coevolved alongside large predators, it is not surprising that they are to detect and respond to the very audible noises associated with a feeding opportunity», says NINA researcher and co-author Craig Jackson.

Lappet-faced vultures about to settle on a cadaver Photo: Per Harald Olsen, NTNU

Read the article in the Ecology and Evolution journal