AfricanBioServices is an EU-funded research project investigating Ecosystem Services in the Greater Serengeti-Mara Ecosystem in eastern Africa. The main aim of the research project is to understand how the ongoing climate change, human population growth and landuse change affect biodiversity and human well-being, and use this information to derive novel solutions for a future sustainable development.

Better science will save nature 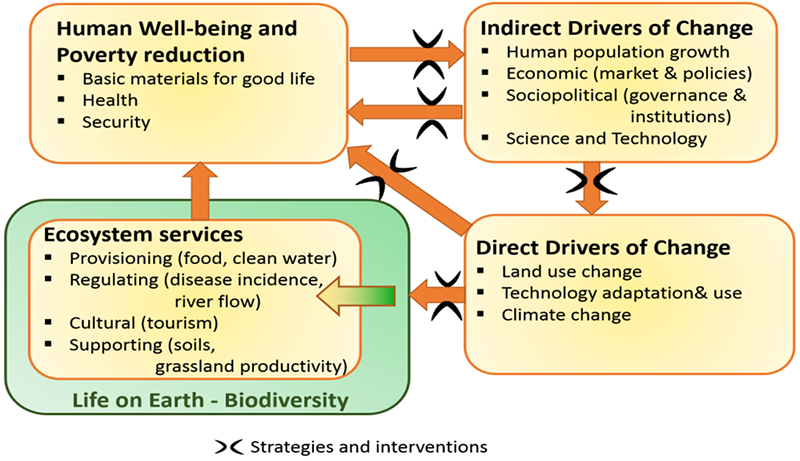 Humans derive a large number of important benefits from natural ecosystems and their associated biodiversity. These so-called ecosystems services include both direct benefits such as food from agriculture or fishing, inspiration and improved mental well-being, income from recreation, and indirect benefits as flood and disease regulation. Human dependence on ecosystems services is the tightest in developing regions of sub-Sahara Africa, where poverty reduces people’s capacity to capitalize on national resources other than those they can acquire from their direct surroundings. This direct dependency on their surroundings makes people in developing countries much more sensitive to accelerated climate change than their developed counterparts. The resulting spiral of poverty exacerbated by increasing human populations, loss of natural habitat (climate change, land use change, overexploitation), loss of biodiversity, deteriorating ecosystems services and impairment of human welfare calls for innovative solutions that encompass the entire socio-ecological-economic system.

The reciprocal relations between human well-being and the state and diversity of ecosystems have been identified and discussed extensively at the global scale in the Millennium Ecosystem Assessment (MA 2005). However, innovative and practical (on the ground) solutions for the continued delivery of ecosystem services now requires focused attention at the regional level. This requires the unravelling of region-specific complex relations between population growth, land use and climate change, biodiversity changes, changes in ecosystem services and changes in human well-being, and the separation between external and internal drivers of change in regions.

The project focuses on the Serengeti-Mara Ecosystem and associated agricultural areas in East Africa; a region that encompasses parts of Kenya and Tanzania. The Serengeti-Mara Ecosystem, which includes the whole river basins of the Mara, Grumeti and Mbalageti (Fig. 1), has a number of unique features that make it suitable for the intended project: i) most people in the study area depend directly on several types of ecosystem services and have few alternative options; ii) it is one of the best studied ecosystem worldwide, including long-term datasets of the main ecological trends extending over several decades and under growing human population pressure; iii) the rapidly increasing human population encounters increasing trade-offs between different types of ecosystem services, such as benefits from agricultural land versus benefits from tourism; iv) the semi-arid nature of the region makes it exceptionally vulnerable to climate change; and v) the ecosystem is world-famous for its spectacular biodiversity. The ‘flagship’ status of the Serengeti-Mara Ecosystem attracts the interest of international partners, and hence will stimulate application of the results of this project elsewhere. 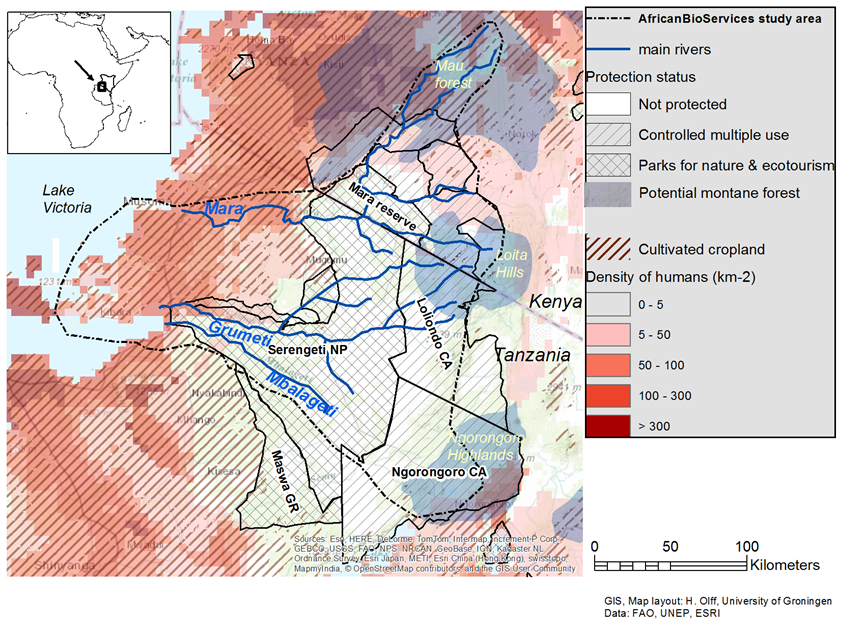 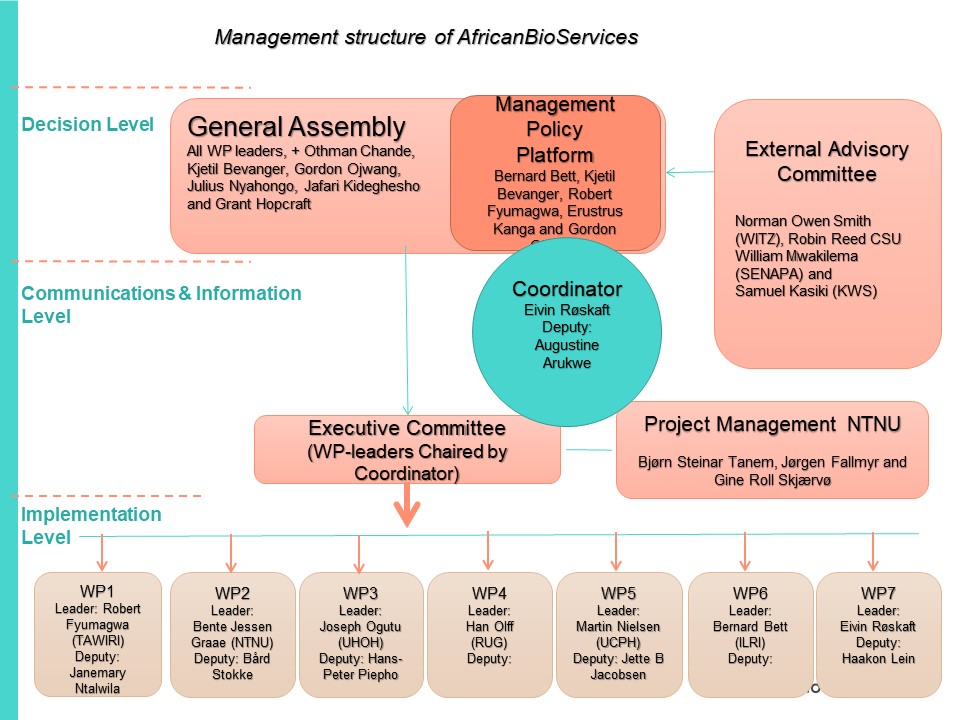 AfricanBioServices is coordinated by Professor Eivin Røskaft at the Norwegian University of Science and Technology, Trondheim, Norway. Contact the coordinator here.

AfricanBioServices is organised into seven interlinked work packages (WPs). In WP1 we will assemble and integrate the relevant Kenyan and Tanzanian data for the region. In WP2, we will quantify the connections between human population growth, land use change and biodiversity changes. In WP3, we will analyse the consequences of climate change for key aspects of biodiversity in the region. In WP4, we will empirically test the links between biodiversity and the core ecosystem services on which people in the region depend. In WP5, we will quantify the dependence of human livelihoods on these ecosystem services. In WP6, we will initiate innovative ways for communicating and disseminating the results of the project through a forward-thinking strategy of ‘continuous engagement’ with local stakeholders that has a proven track record of success. WP7 encompasses the project management and aims at achieving the objectives and milestones in a timely manner and to the highest possible standards.