Reflection on my fieldwork as my journey draws to an end

Crossing the Kenya border around re-election time can really make you nervous but thankfully, everything went well. As my project and stay in Africa is coming to the end, I am reflecting on my journey, about the importance on cows, female circumcision, the impact of nature and the opportunity I have been given with my fieldwork with AfricanBioServices.

If you have ever been on a game drive in the Masai Mara national reserve in Kenya, you have most likely driven through the Sekenani village, and also possibly entered the park through the Sekenani gate. Sekenani, or a twenty minute walk from Sekenani, is where we are staying now. This area is the last place we are having the program before Per and I are going back to Norway. 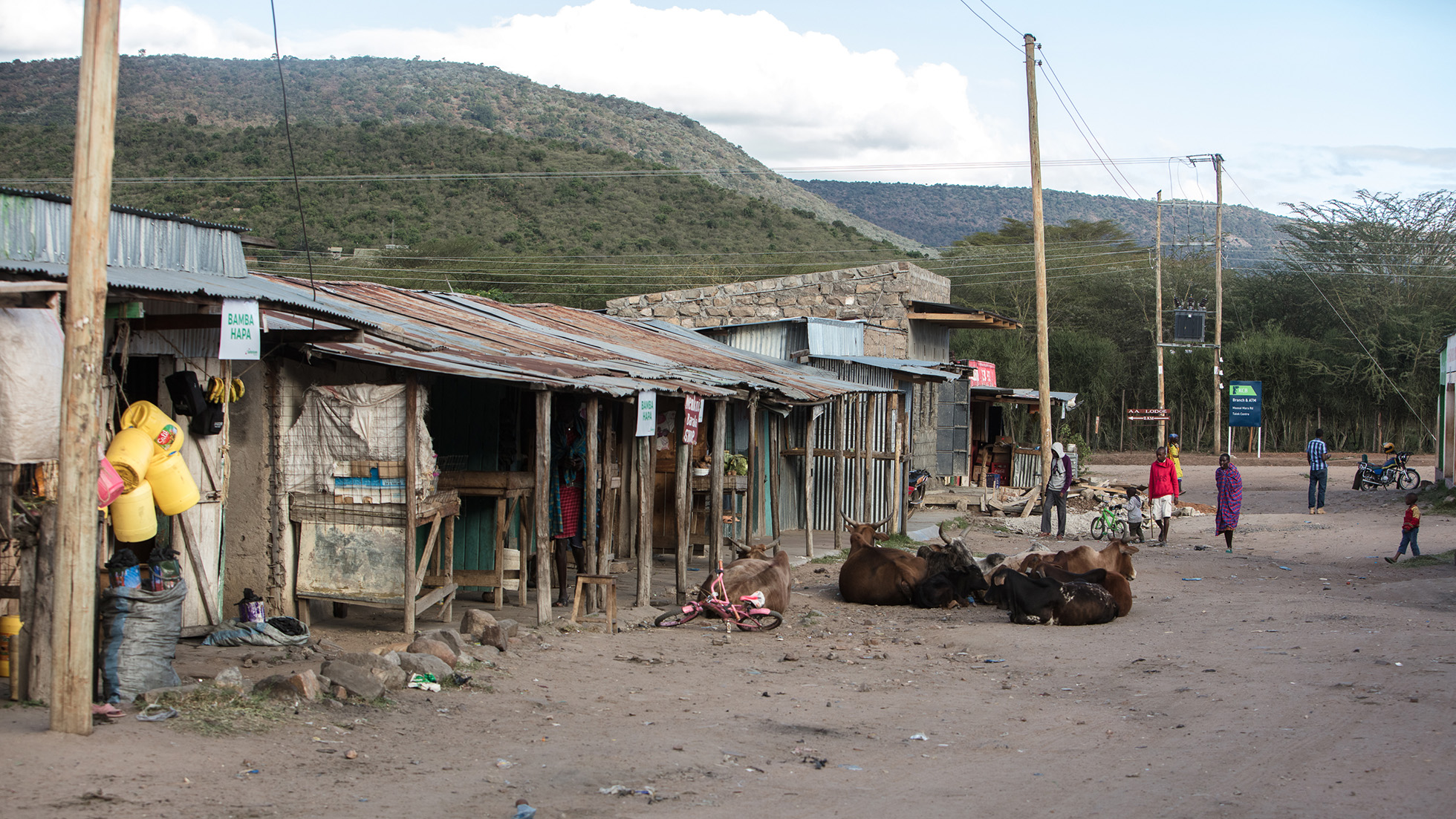 Cows have been a common sight during the whole trip, and is also very present here in the areas of the masai-tribe. Here at Sekenani center. Photo: Per Harald Olsen/AfricanBioServices

Crossing the border to Kenya

As Mara is in Kenya, we had to cross the Tanzania-Kenya border to come here. Neither me or Per looked forward to this. Crossing the border between Tanzania and Kenya often take a lot of time especially when we don’t come from neither of the two countries, and also it can be hard to know what is going on. To make the situation a bit better and have something to look forward to, we decided to have a good meal in Nairobi when we reached there. And actually, seen away from some waiting, things went very smooth. Topped with a good meal in Nairobi, it was a very good day. 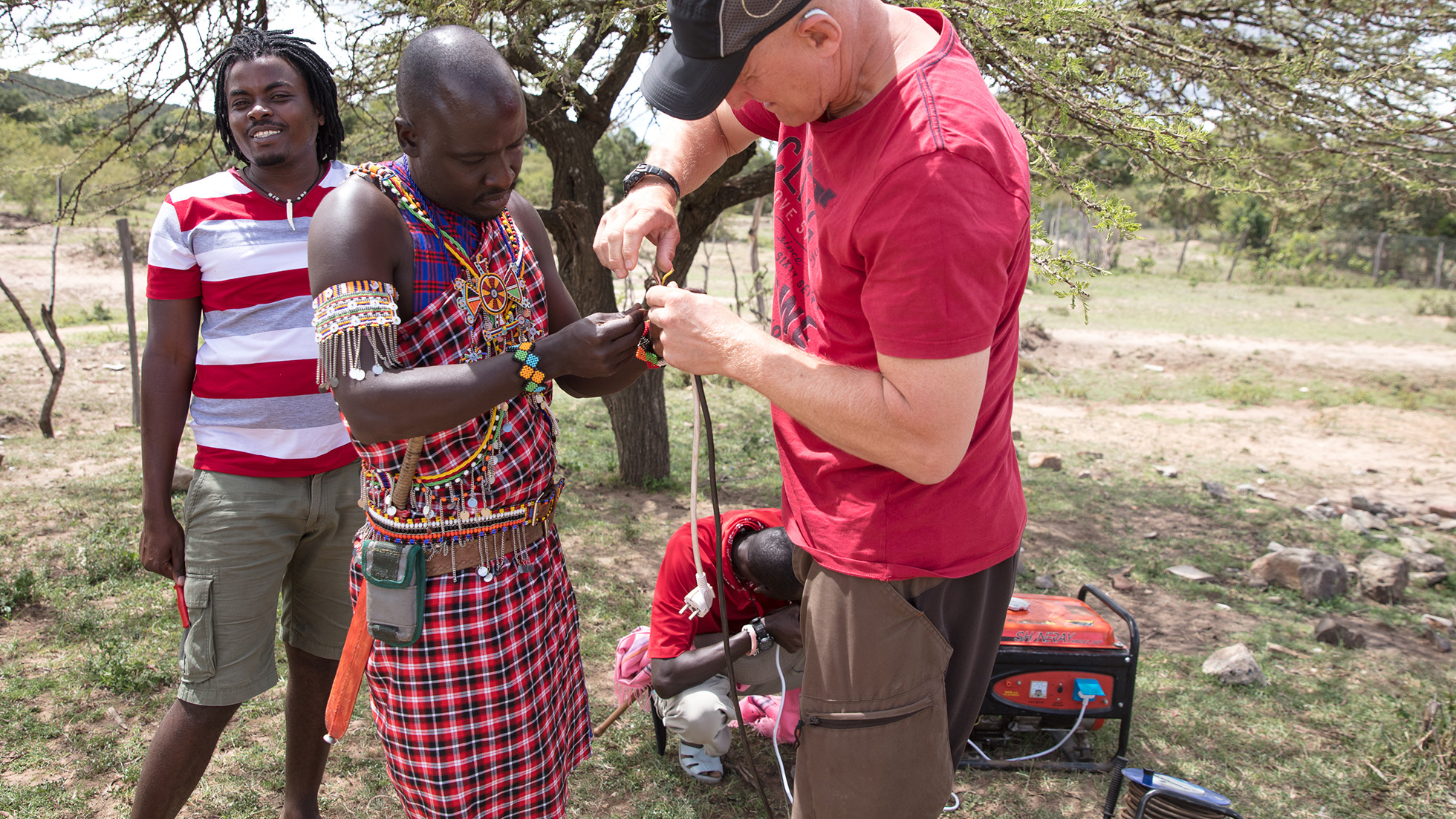 Sometimes improvisation is needed during field work. As we left the generator in Tanzania and borrowed another one in Kenya, the cables we brought did not fit. The machete showed as a very useful tool to help fix this, and so the day was saved.

In general, going to Kenya has brought up more possible issues than I had thought about. For example, the time we were planning to go, were also the time for the Kenyan re-election. Several people were killed during the first election, and a similar situation were possibly expected for the re-election, so Eivin told us to wait some few days to go there. Stephen, the community Facilitator for Mara, told me that in Mara most people did not vote for the re-election. As they were voting for the opposition candidate, they said their votes would most likely not have a say anyway. Also according to those we have met in Mara, the sitting (and still sitting) government is not very popular in this area. When speaking about population growth during the program in Mara, there were comments in both villages saying that the masais had to continue getting many children to increase in number, because the government would keep on ignoring them if not. 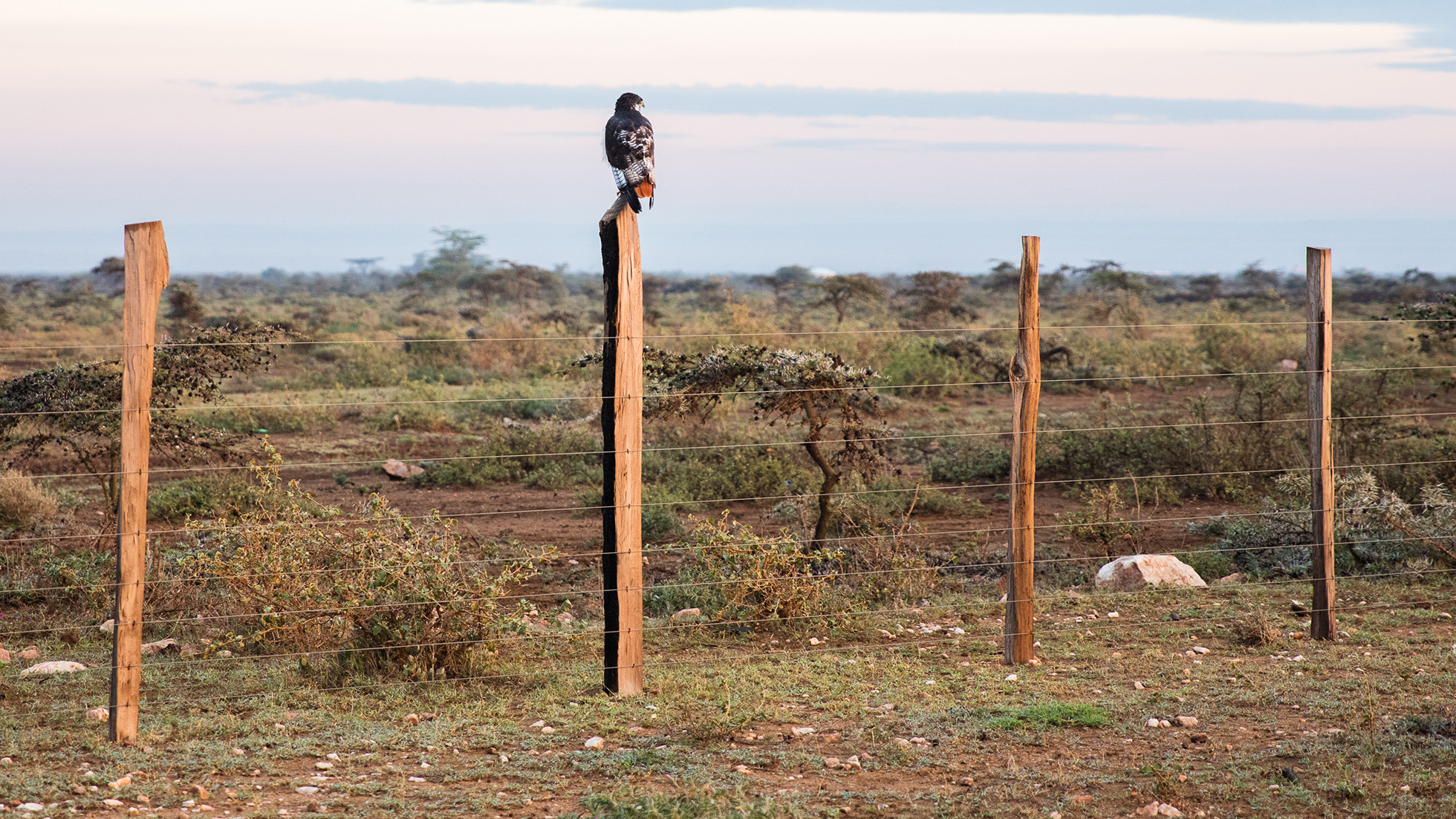 The last years, fencing your land has become common in the areas surrounding the Masai Mara National Park, even though living close to wildlife is tradition with Masai. This fencing is possibly a reaction on the government, as the communities around the national park. Also, with increasing number of people and cows, fencing your land makes sure your grass is not eaten by other cows, as grazing is no longer a matter of course. Photo: Per Harald Olsen/AfricanBioServices

More on this in Phd candidate Teklehaymanot Weldemichel’s blog post: Fencing-in oneself: Understanding the fencing crisis in Maasai Mara, Kenya

The importance of cows

During the whole stay, in both Tanzania and Kenya, cows have had a bigger impact than I would imagine. For many of the people living in the villages, cows are connected to status, and is an important source to both income and food. One time, five persons were missing for the program. I was told that they would most likely not come, as a cow had been stolen, and they in one or another way were working on finding it. Another place, one participant, the village officer, were not present as he had to make sure that a man who was accused of stealing a cow, was not killed. Also many places, especially the villages with most masai-people, the time of the program was set according to when people took the cows for grazing.

Grazing, or overgrazing is quite connected to th population growth, that we discuss in the program. Overgrazing is a big problem many places, and cows showing their ribs are a common sight, as grazing is becoming scarce. But as mentioned, cows are highly connected to social status, and hence if you go to settle in a Masai village, your money will be of little help with this if you have no cows. They say that first comes the cow, then the human, as the human depend on the cow to be alive. Inside a masai boma (the house of a Masai) you will find a small room made especially for new born cows to stay in the first time of their life. Also, a well-known dish for the masai is cow-milk and cow-blood mixed together, then cooked for several hours. This mixture is very common to give to newborn, women who have newly given birth, people who are sick, but also girls and boys who have been circumcised, as it is very nutrient. 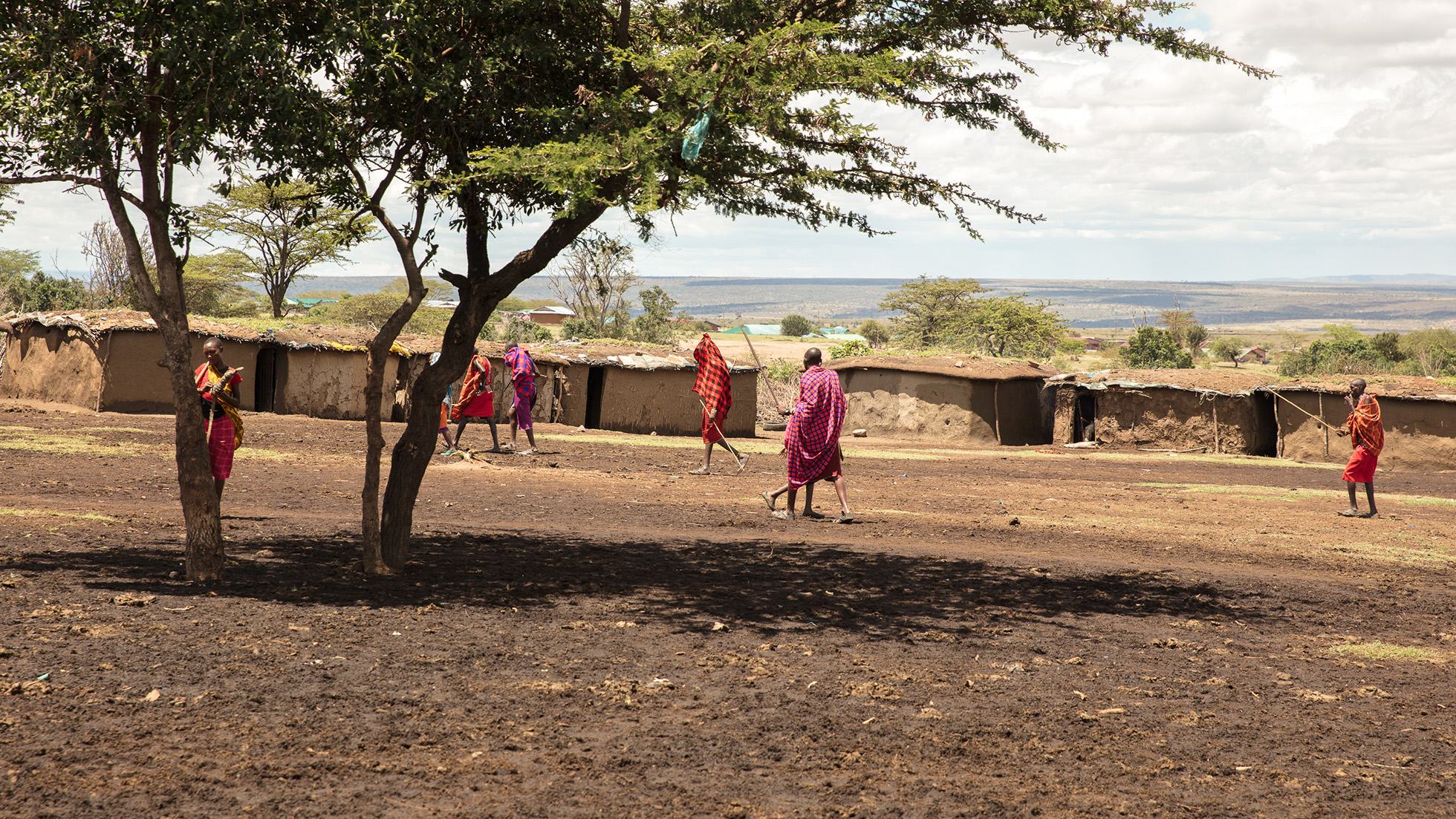 This masai village has its houses built in a circle. At night, cows stay at the inside, and is then protected from predators. At day, they are taken out for grazing. Photo: Per Harald Olsen/AfricanBioServices

Circumcision for the girls, FGM (female genital mutilation) is nowadays more rare than before, but it still happens both within the Masai and other tribes in Kenya and in other countries in Africa. Especially people in the older generations regards this as the only way to make a girl pure. Earlier with the Masai, if a not-circumcised mother was giving birth, most midwives would deny or maybe require two cows to deliver the baby, Stephen told me. As FGM is a terrible violation against girls and women, giving different means for the rest of their life (depending on what kind of circumcision), this is now illegal in many African countries, amongst them both Tanzania and Kenya. But as tradition yet is strong many places, there are still way too many of those countries where circumcision is the rule rather than the exception, even though the government has made it illegal. 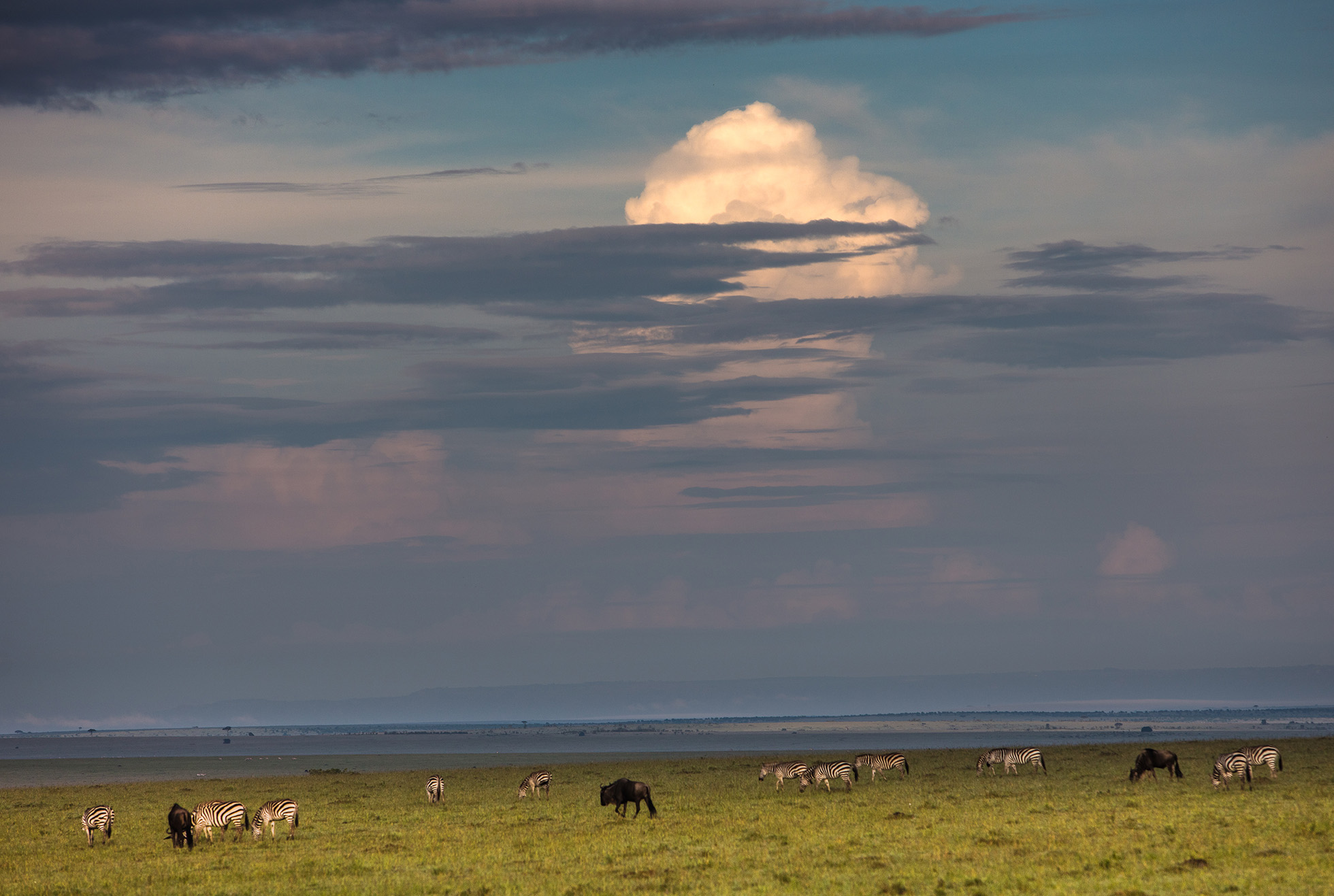 Circumcision marks the separation from being a child to a grown-up. For masai, the wildlife is important to take care of, and when being a grown-up, childish things like killing wildlife should not occur, if not needed for self-protection. Photo: Per Harald Olsen/AfricanBioServices

A once in an lifetime experience

As mentioned in the beginning, the fieldwork is now closing to an end. To somehow make a sum-up, my impression is that much of what we talk about in the program are things that the participants know from before, but as they have lived with nature around them all their life, sometimes they, like most people around the world, may take it for granted. Pictures of other kinds of nature, like for example Norway with snow and other kinds of wildlife have been a big favourite, as these are things many have never seen before. Last, but not least, climate change, population growth and land use change are already affecting their everyday life. Discussions about this have taught me a great deal, and it also seems like the participants have found it interesting to talk about.

In other words, going back to Norway will be good but also a bit sad. The opportunity to do this field work together with Jeremia, Rose, David and Stephen (Community Facilitator) I highly suspect is for once in a lifetime, so I feel very lucky. Them, together with Per, Juma and many other people (amongst them Nganana who stepped in for CF Elibariki in Loliondo) have made all of this possible and I am forever grateful. As I learnt in Tanzania, hakuna matiti (no problems).

My first blog post: Travelling Tanzania with a generator 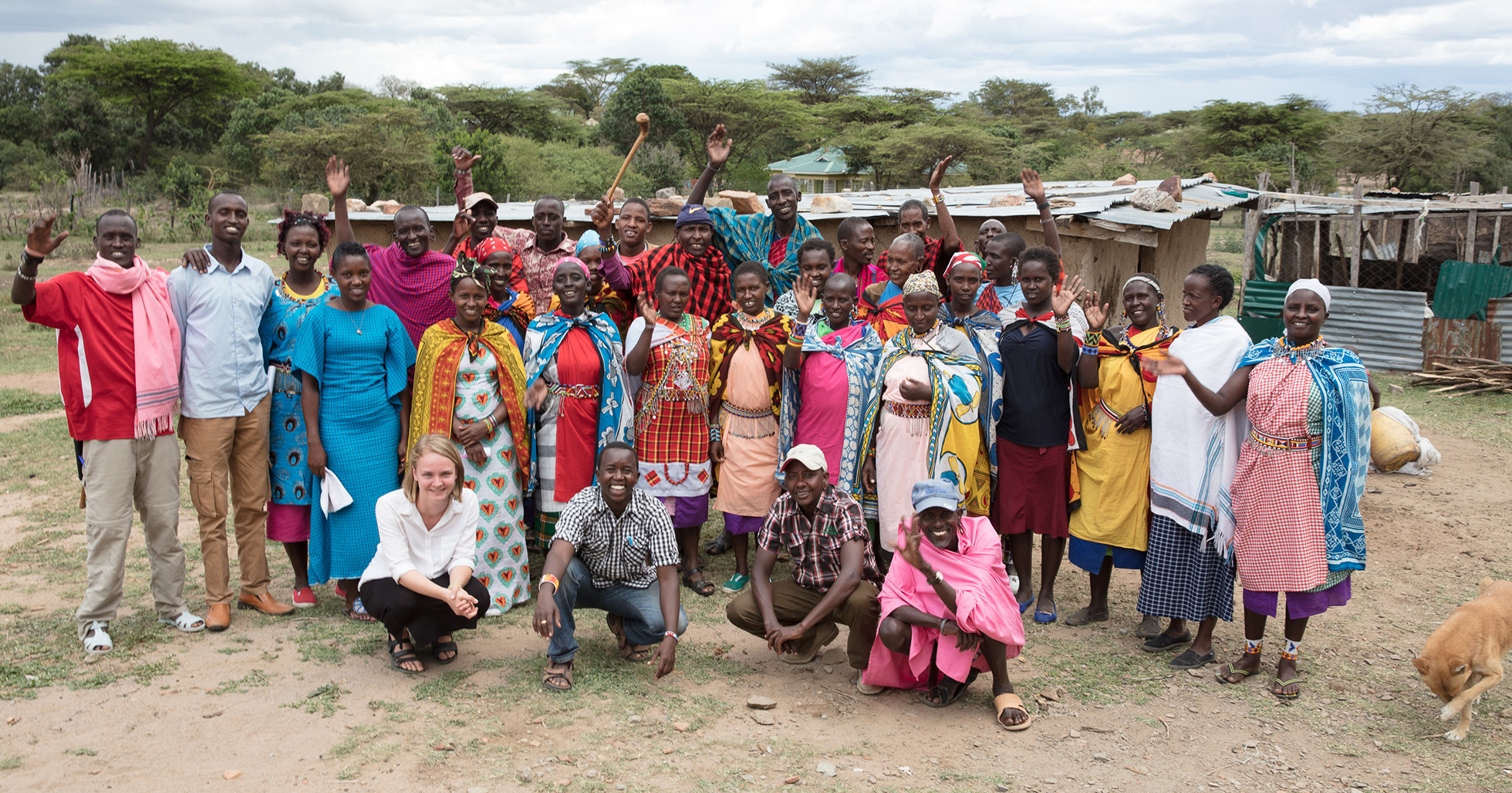 The last group me and Stephen (in the front next to me) did the program with. Photo: Per Harald Olsen/AfricanBioServices

More photos from my adventures in Tanzania